Taiwan, Singapore and Jersey top the list of the places with the fastest internet speeds in the world – the UK is at 33rd place and the US at 15th in the ‘Global League’ rankings.

The average download speed in top spot Taiwan is 85 megabits per second and that speed it would take someone just eight seconds to download a high definition movie.

Researchers from WebsiteToolTester studied data submitted by internet users through online speed tests, excluded any with an obvious fault on the line and collated them to create the global ranking.

The average speed for the Earth has gone from about 9Mbps in 2017 to just over 11Mbps in 2019 – which researchers put down to infrastructure improvements.

They also found that 18 of the top 25 countries with the fastest internet speeds were in Europe – with the fastest coming from the tiny island of Jersey – with speeds of 67Mbps – 100 per cent higher than the UK.

To gather the data they took speed tests completed by people online across the world – with billions of different tests analysed to curate the ‘global league’ of results.

There are risks with this approach – people are more likely to do a speed test when there is a problem and the average speed reported is slower than the speed available due to slower WiFi or connections in the house.

HOW DO YOU FIND OUT WHICH COUNTRIES HAVE THE FASTEST INTERNET?

To discover which countries around the world have seen the biggest increase in internet speeds researchers studied the results of speed tests submitted by users.

‘This is why the country averages will appear lower than you might expect when compared to first-hand experience,’ the authors of the report said.

‘However, since every country’s average will suffer this flaw – innate to speed tests – the comparative placement in the global league is relatively sound.’

They said the aim of the study was to provide a league of ‘relative broadband speeds’ not absolute measures of bandwidth – so the flaws actually create a more realistic picture.

The highest placed European country in the league was the tiny island of Jersey – the average download speed was reported as 67.4Mbps and it would take just 10 seconds to download a movie.

This isn’t really a surprise, according to Andrew Ferguson from ThinkBroadband, and independent internet speed comparison service that studies UK networks.

‘The improved nature of Jersey is very much to be expected as the island has seen a roll-out of full fibre replacing the old ADSL2+ network,’ he said.

‘Though there is a caveat around the data sample size for Jersey with 551 distinct IP addresses from some 40,000 premises, i.e. it is a small sample and this may mean the confidence levels are much lower.’

The slowest country in the world for broadband speeds is the Yemen where it would take more than 30 minutes to download a movie from a 300 Kbps internet connection – that is just a third of a megabit and slower than even 3G mobile internet. 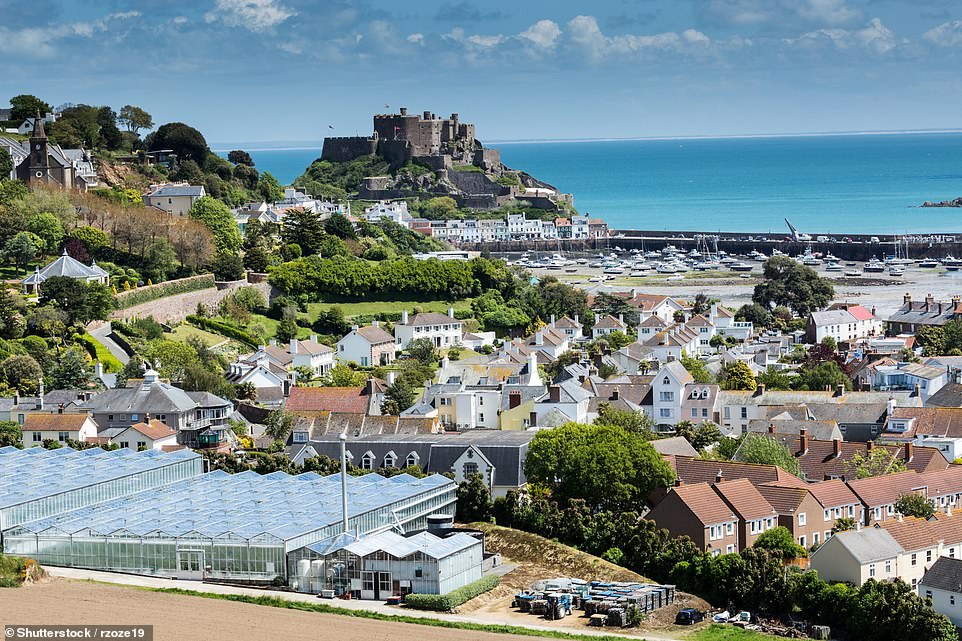 The picturesque island of Jersey is famed for farming, finance and giving its name to fabrics – but under the rolling hills, cows and fishing industry hides one of the fastest broadband networks in the world

The researchers say Europe has more countries in the top 25 than any other continent – 18 in total – in part due to improvements in infrastructure, including fibre optic cables replacing copper.

In Jersey the entire island is connected by fibre – rather than slower copper lines – going into every household and business, rather than to the cabinet as they do in most of the UK.

Daragh McDermott, Corporate Affairs Director at JT Jersey was the first jurisdiction in the world to connect every home and business to a full fibre network – a ‘hugely challenging but exceptionally rewarding programme’.

‘The results are now paying huge dividends in terms of JT’s customer experience and economic activity in Jersey more generally.

‘Since this analysis was completed, minimum guaranteed broadband speeds have been doubled from 250 Mbit/s to 500 Mbit/s and our intention is to increase these to 1 Gbit/s in the very near future.’

Robert Brandl, CEO of WebsiteToolTester said there was nothing more frustrating than slow internet speeds, especially when they stop you working or connecting with people.

‘It’s interesting to see business hubs such as Taiwan and Singapore, mixed in with smaller countries such as Jersey in the top countries leading the way for fast internet speeds.’

Taiwan’s internet speeds have improved over recent years and this growth in overall internet connection speedwas essential for the country, according to Brandl.

‘High-tech is Taiwan’s most critical industry, contributing to 18 per cent of the country’s GDP, with electronic manufacturing companies making up the bulk of the sector,’ the report found.

This has prompted the government of Taiwan to invest heavily in digital infrastructure to ensure they have very fast speeds available to businesses.

‘Cross-border online shopping trade is continuing to grow strongly in Taiwan, with huge steps being taken to develop a digital economy that encompasses digital media and e-services,’ the report says. 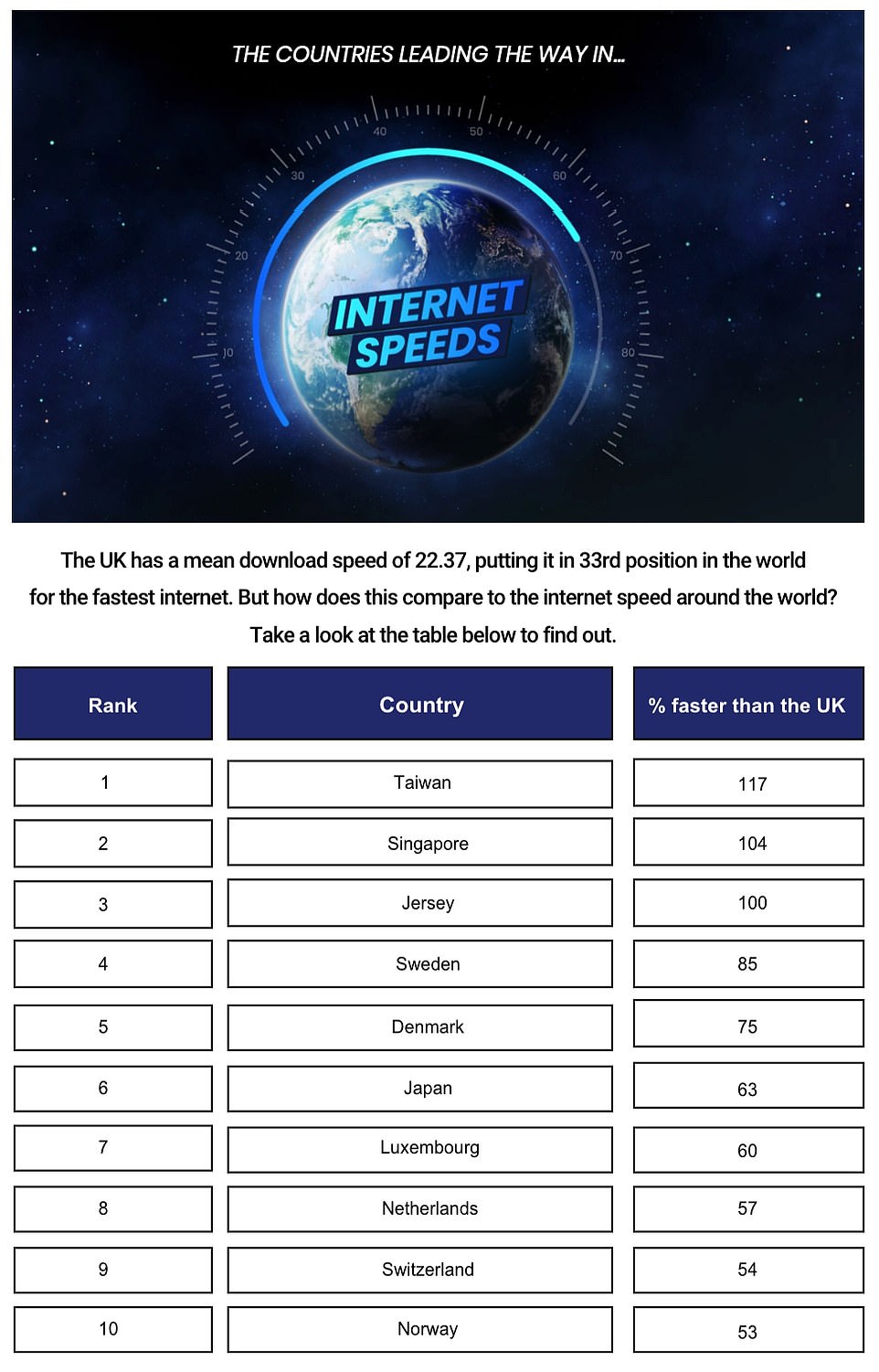 Not all surveys of internet speeds agree with the WebsiteToolTester assessment – according to ThinkBroadband the average mean download speed in the UK is actually 39.3Mbps.

This is based on users submitting speed test results of their home broadband and as not everyone takes the fastest package – the test isn’t based on the ‘fastest available speed’, but the average people experience.

‘The average mean speeds look a lot lower than one would expect,’ said Andrew Ferguson from ThinkBroadband.

‘This is not just in the UK if you look at the Republic of Korea which has Gigabit broadband available to the majority of the country you would expect speeds more like those of Jersey.’

The top ten countries in terms of internet speeds include Taiwan, Singapore, Jersey, Sweden, Denmark, Japan, Luxembourg, Netherlands, Switzerland and Norway – you can use the above tool to find out more.

All of the top ten have seen an increase in speeds between 2018 and 2019 based on the data studied by the researchers with the largest increase coming from Jersey who jumped by 190 per cent.

OpenReach, the company responsible for a large proportion of the UKs internet infrastructure is working to build a gigabit capable full fibre network to four million homes by next year.

They say that millions of homes can already access broadband speeds over 30Mbps through their network but many customers haven’t upgraded to the faster connections available to them.

Andrew Ferguson from ThinkBroadband backed that up. He said consumer choice needs to be considered when looking at broadband speeds as most people don’t want the fastest, and most expensive, connection.

‘If everyone did this in the UK the mean would be more like 357 Mbps but this would cost people more money since the fastest options generally cost more.’

Facebook Messenger is killing the ‘Discover’ tab to prioritise Stories

Scientists in the Arctic get high speed internet for the first...