By Michael Thomsen For Dailymail.com

It uses a series of strategically-placed 12-foot tall posts equipped with radar sensors, cameras, and infrared monitors that allow it to record footage at night.

Rhinos in South Africa’s Kruger National Park are being monitored by an ambitious surveillance system, codenamed ‘Postcode Meerkat’ (pictured above)

The solar powered radar and camera sensors scan the surrounding area for motion and connect to a computer system that can distinguish between animal and human movement.

When a potential group of poachers is flagged by one of the sensors, a ‘reaction unit’ travels to the area via helicopter or SUV to further investigate.

The number of encounters with poachers over the same period has remained mostly steady, with 2,662 recorded incursions into the park in 2017 and 2,620 incursions in 2018.

Most of those incursions are recorded by the surveillance system but only a small percentage ever lead to direct contact with park staff. 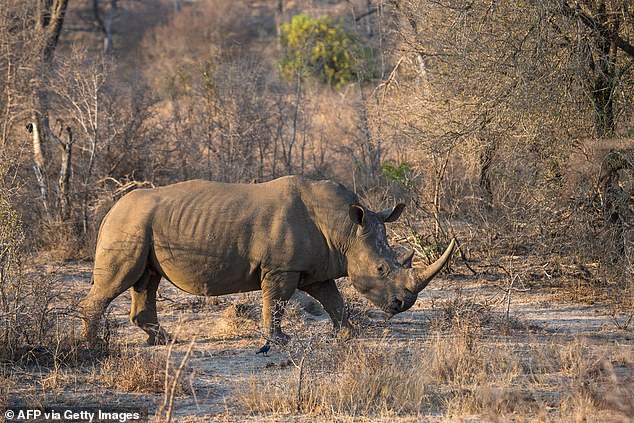 Rhino populations in Kruger National Park are estimated to be between 7,000 and 8,000, and the number of annual deaths from poaching have slowly declined since Meerkat was implemented

Meerkat uses a series of solar powered cameras, radar sensors, and infrared sensor to observe the terrain at night

This suggests that while overall poacher populations haven’t declined, they appear to have become more cautious given the likelihood they’re being watched.

With a rhino population that’s estimated to be between 7,000 and 8,000, even small annual improvements can make a difference.

The Meerkat system has advanced motion tracking to help it distinguish human and animal movement. When the system flags a potential threat from poachers special ‘reaction units’ will travel to the indicated region via helicopter or SUV

Preserving the parks rhinos can also have impact the park’s yearly revenue, which saw visits from 1.8 million tourists in 2017.

‘They attract tourists from all over the world. If we are not able to conserve that, those people will not come here and the impact of that on livelihoods, in the communities around the parks, and our economy — it’s not measurable.’

WHY RHINOS ARE KILLED FOR THEIR HORNS

Hidden chambers found at the 3,400-year-old tomb of Tutankhamun