Researchers build a working dictionary of 1,500 dance moves that bees use to communicate with each other while flying in formation

By Michael Thomsen For Dailymail.com

A team of scientists from the University of Minnesota have created a working dictionary of more than 1,500 unique dance moves used by bees to communicate with each other.

The list was compiled as part of a larger study into how land managers might prepare natural habitats to be more accommodating to bees, whose populations have been in rapid decline in recent years.

The team, led by University of Minnesota’s Morgan Carr-Markell, brought two large bee colonies to two different sites in Minnesota where previously developed land had been reconverted into prairieland with a mix of native and non-native plants.

Researchers in Minnesota observed two different colonies of bees using more than 1,500 different ‘waggle’ dance moves to communicate with each other while flying in formation

The team originally wanted to study how bees reacted to different types of pollen sources to help guide land managers to an optimal mix of plants to support new bee populations.

As they observed the bees moving across the landscape they began to notice some unusual behavior, what the team described as ‘waggle dances,’ according to a report in Newsweek.

These waggle dances were used when groups of bees were flying outside of the hive, typically in a figure-eight formation.

The waggles were used to communicate with other members of the formation, indicating a range of information, including where to turn, the direction of the nearest pollen source, how far away it is, and how generally valuable to view the plant’s pollen.

In all, the team cataloged 1,528 unique waggle dance motions, showing an unexpectedly complex and nuanced communication system among the two bee colonies. 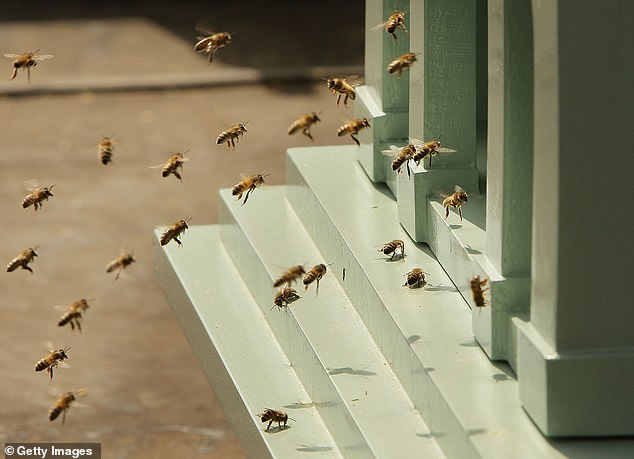 The bees were able to communicate a range of information just by shaking their rears, including indicating when to turn, how far away a source of pollen was, and what general quality the pollen source would be

‘The thing I think is the most interesting about bees is their communication,’ Carr-Markell said.

‘So I wanted to be able to use that to help land managers who are interested in planting for bees, and give them on-the-ground information.’

By analyzing the bee’s communications, the team was able to show that the bees were most attracted to plants that were native to the surrounding Minnesota prairies. 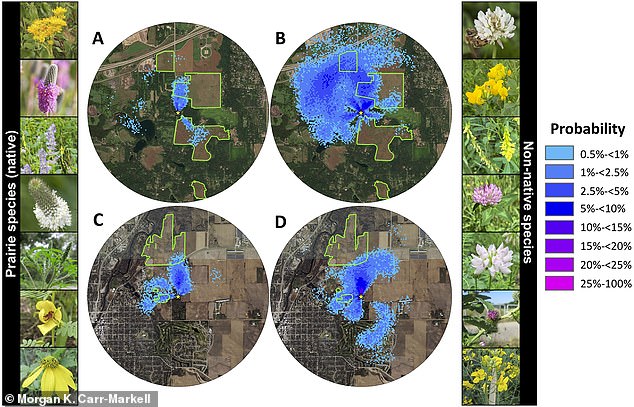 By tracking the bees movements and communications, the team was able to demonstrate they preferred pollen sources that were native to the prairie and not newer non-native plant species

They found the most highly prized pollen plants were indigenous to the prairies, including goldenrods and prairie clovers.

Meanwhile, areas of the prairie populated by non-indigenous plants tended to be evaluated as slightly lower priority targets by the bees.

‘Our results suggest that including certain native prairie [flowers] in reconstructed prairies may increase the chances that colonies will use those prairies as major food sources during the period of greatest colony growth and honey production,’ the study says.

WHAT IS THE HONEYBEE CRISIS?

Honeybees, both domestic and wild, are responsible for around 80 per cent of worldwide pollination, according to Greenpeace.

But bee colony collapses across the globe are threatening their vital work.

Bees are dying from a combination of pesticides, habitat destruction, drought, nutrition deficit, global warming and air pollution among other factors.

The global bee crisis can potentially be solved if dangerous pesticides are eliminated, wild habitats are preserved and ecological agriculture is restored, according to Greenpeace (file photo)

Greenpeace has reported: ‘The bottom line is that we know humans are largely responsible for the two most prominent causes: Pesticides and habitat loss.’

This is important for a number of reasons, chief among them the amount of work bees put into our food production.

Greenpeace has suggested the following solutions to the problem:

Samsung apologises after sending a bizarre notification to thousands of users