A mother heard her family say their final goodbyes because of her battle with sepsis which saw her lose all of her toes, some fingers and her right hand.

Racheal Acuff, of Missouri, drove herself to hospital in June 2018 when she noticed blood in her urine – a sign of a kidney infection.

Doctors diagnosed the now 32-year-old with pneumonia, and her condition rapidly declined over the next 12 hours.

The last thing she remembers before being sedated for three weeks is being given numerous tests to figure out what was wrong.

When Ms Acuff came round, she was shocked to be told she had septic shock – a complication of sepsis, toxic shock syndrome and was on dialysis.

She spent 38 days in intensive care before being discharged in August 2018. In the months after being allowed home, she needed multiple amputations because her near-death battle restricted blood flow to parts of her body.

Racheal Acuff, 32, had to listen to her family saying their final goodbyes while heavily sedated as she battled sepsis. Pictured in hospital at an unknown date 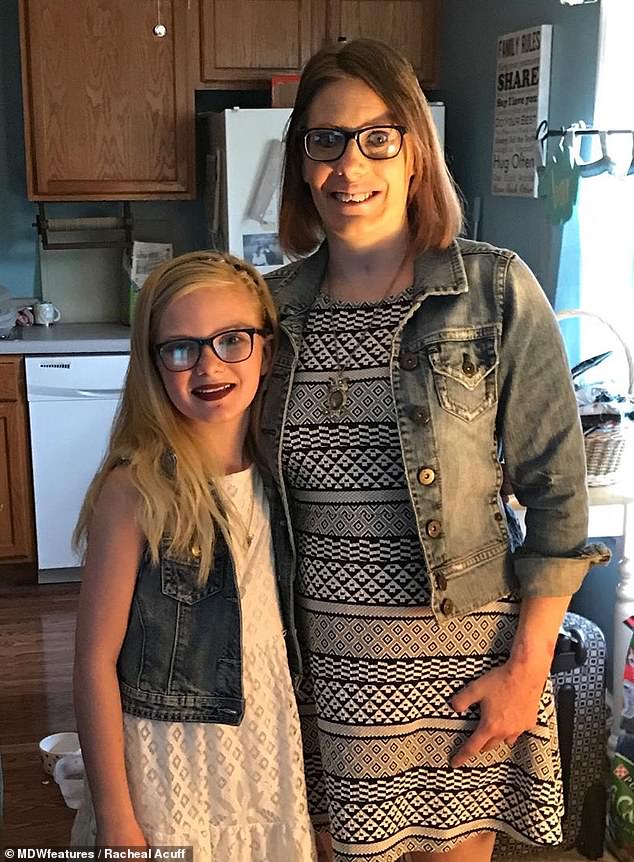 The mother to Eden, 13, and Reagan, 9 (pictured), had no symptoms other than tiredness leading up to the day she took herself to hospital on June 19, 2018. Pictured after her illness 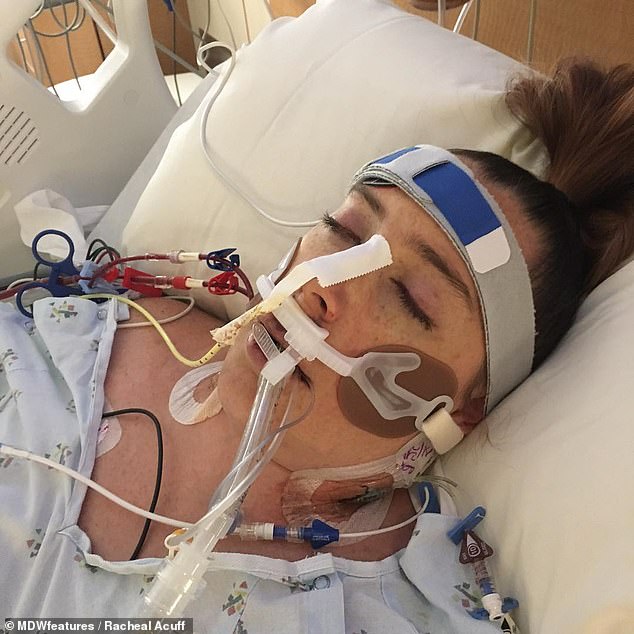 Ms Acuff was sedated for three weeks as doctors ran numerous tests in a race to figure out what was wrong. Pictured, while on a ventilator to help her breathe 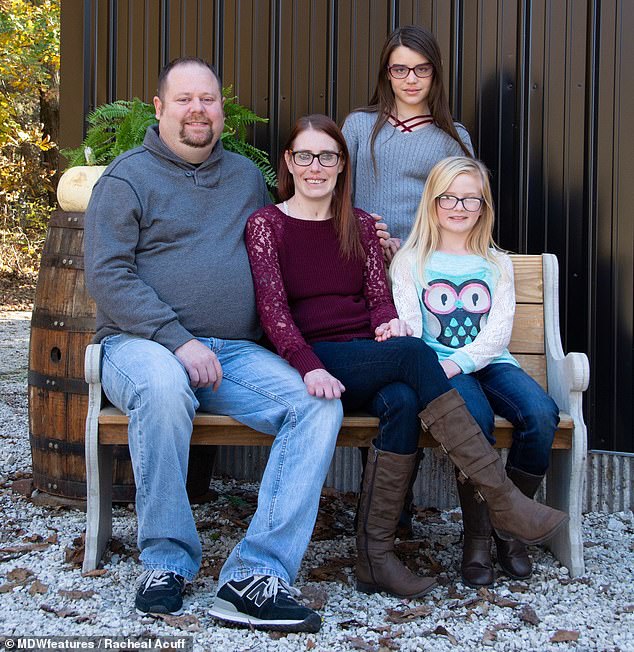 Ms Acuff’s family, including boyfriend Taylor, 36, and daughters Eden, 13, and Reegan, were called into the hospital to say their final goodbyes. Pictured recently

Ms Acuff said: ‘There is no medical reason I should be alive. So, something more powerful is in my corner for sure.

‘I remember hearing my family cry when the doctors told them to bring in family to say their last goodbyes, but I was sedated and had no way to respond to them.

‘I felt totally helpless but I knew I had to fight to prove them wrong. I didn’t feel like I was dying, and I wasn’t going to.

‘When I first woke up, I was totally surprised, and then I went into fight mode. I began to fight harder every day to get better.’

The mother to Eden, 13, and Reagan, nine, had no symptoms of pneumonia other than tiredness leading up to the day she took herself to hospital on June 19, 2018.

Pneumonia can develop very suddenly over 48 hours, with symptoms including a cough, rapid heartbeat and fever.

A kidney infection usually happens when bacteria gets into the tube that carries urine out of your body before travelling up to the bladder, causing cystitis, and then up into the kidneys.

Doctors took a number of tests on Ms Acuff’s arrival, including her blood pressure which was almost too low to register.

Septic shock, a complication of sepsis, is characterised by blood pressure dropping to a dangerously low level after an infection.

Ms Acuff said: ‘I had no symptoms of pneumonia and I only knew of the kidney infection when I peed blood.

‘I drove myself to the hospital as my boyfriend [Taylor, 36] was currently in the same hospital with gallbladder issues.

‘The last thing I remember was being told they were moving me upstairs and then I was sedated for three weeks.’ 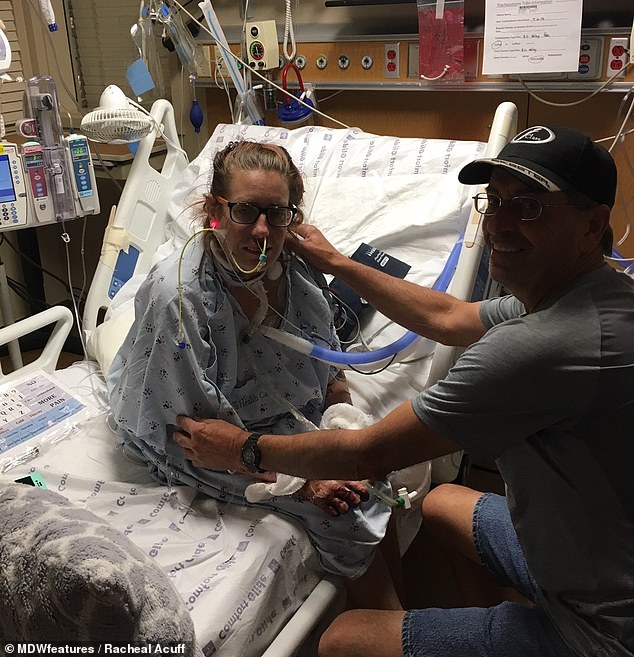 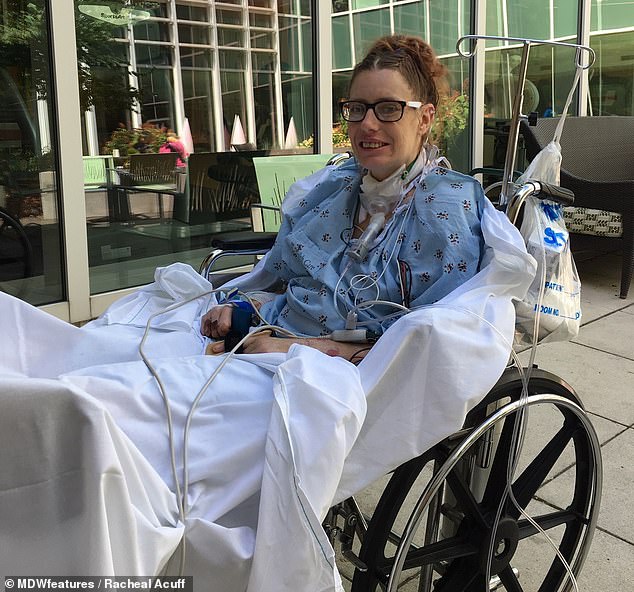 Ms Acuff spent nine weeks fighting for her life in hospital. Pictured outside in a wheelchair as she had to gain strength to walk at a rehabilitation facility 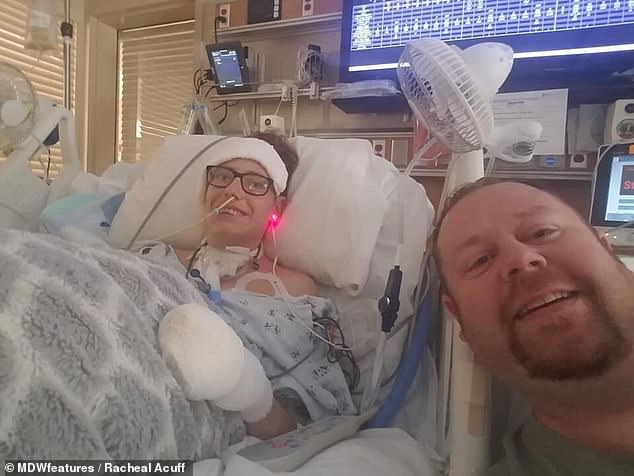 Despite being initially surprised when she woke up, Ms Acuff made it her mission to get better for herself and her family. Pictured with her boyfriend Taylor while awake in hospital

During this time, Ms Acuff’s family were called into the hospital to say their final goodbyes, which she could hear but not respond to.

When Ms Acuff came round weeks later she was shocked when her mother told her what had happened.

Ms Acuff said: ‘When I woke up my mum explained to me that I had septic shock, DIC and toxic shock syndrome from an unknown source.’

TSS is caused by Staphylococcus or Streptococcus bacteria, which are normally harmless but can release toxins deep in the body that damage tissue and organs.

Ms Acuff said: ‘I was on a ventilator which was helping me breath, a feeding tube for all my nutrients, a port-a-cath for my dialysis because my kidneys were no longer working and two IVs for access for blood and to give me all my medication.’

Despite being initially surprised when she woke up, Ms Acuff made it her mission to get better for herself and her family.

She was in an intensive care unit for 38 days before being moved to a step down unit for a further eight days and spending two-weeks at an inpatient rehabilitation facility getting her strength back to walk. 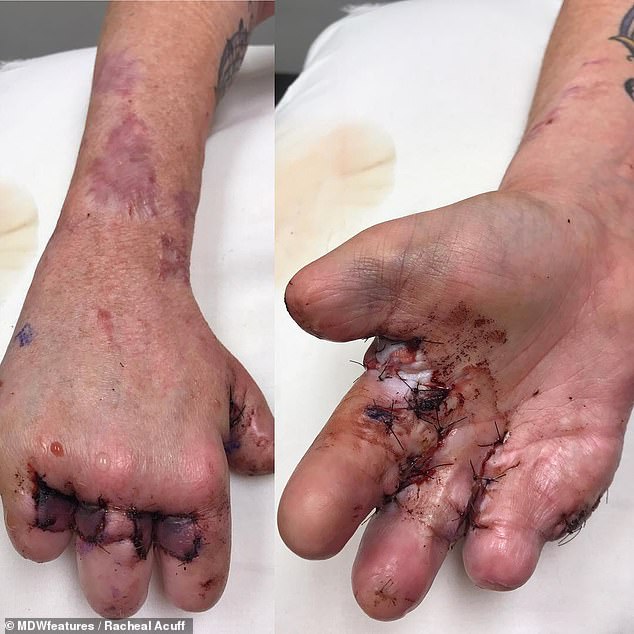 On August 29, 2018, Ms Acuff had the dead parts of four of her fingers on her left hand removed followed by the removal of the dead tissue on all five fingers on her right hand on September 10, 2018 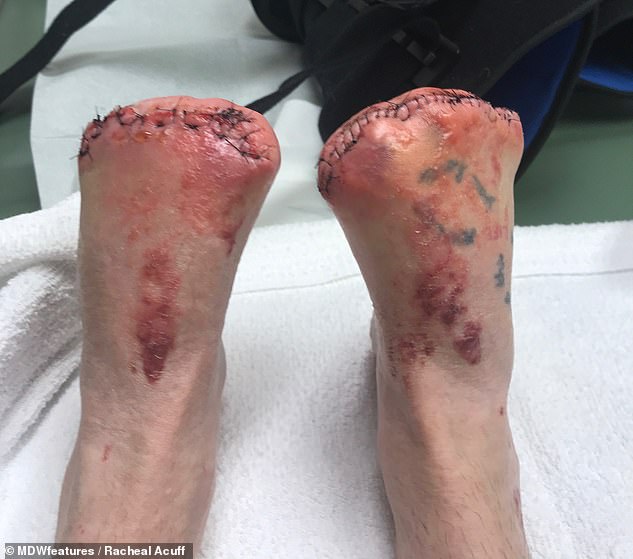 Ms Acuff had the amputation of all ten of her toes on September 24, 2018 which left Ms Acuff relearning to walk for three weeks. Pictured straight after surgery 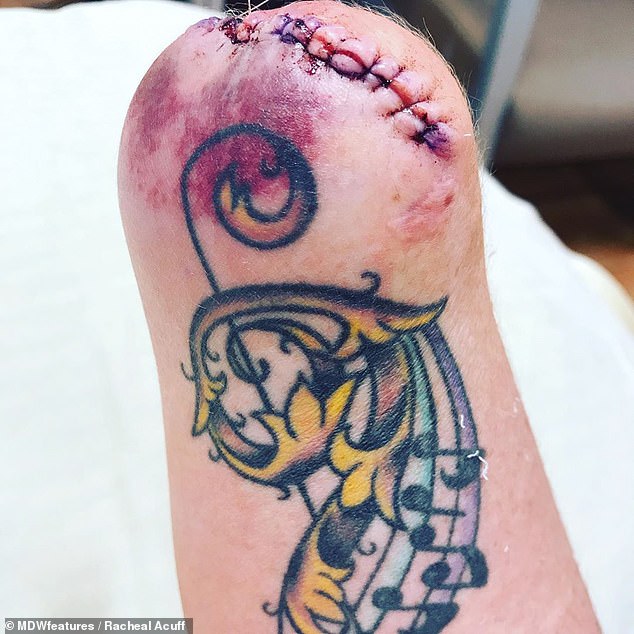 On May 22, 2019, Ms Acuff had a trans-radial amputation of her right hand two inches above the wrist due to its lack of mobility and function

It was a total of nine weeks before she was sent home in August 2018.

Since returning home, Ms Acuff has had surgeries to amputate her fingers, toes and hand which were left damaged due to the lack of blood flow while she was ill.

Sepsis can cause the blood’s clotting mechanism to go into overdrive and cause blockages inside the blood vessels.

When blood can’t pass through the blood vessels, oxygen and vital nutrients can’t get to the body’s tissue. The tissue can die and need amputation.

On August 29, she had the dead parts of four of her fingers on her left hand removed followed by the removal of the dead tissue on all five fingers on her right hand on September 10, 2018.

She had the amputation of all ten of her toes on September 24, 2018 which left Ms Acuff relearning to walk for three weeks.

Ms Acuff had revision surgery to remove the little finger on her right hand on March 28, 2019 and on May 22, 2019 had a trans-radial amputation of her right hand two inches above the wrist due to its lack of mobility and function.

She is learning to adapt to life without her right hand and is looking forward to getting a prosthetic in a few weeks’ time.

Although her recovery has been incredibly tough, Ms Acuff said it has shown her a strength she never knew she had and has taught her to appreciate everything in life.

Ms Acuff said: ‘The recovery process of sepsis was long and discouraging but in the end it gave me strength I didn’t know I had. 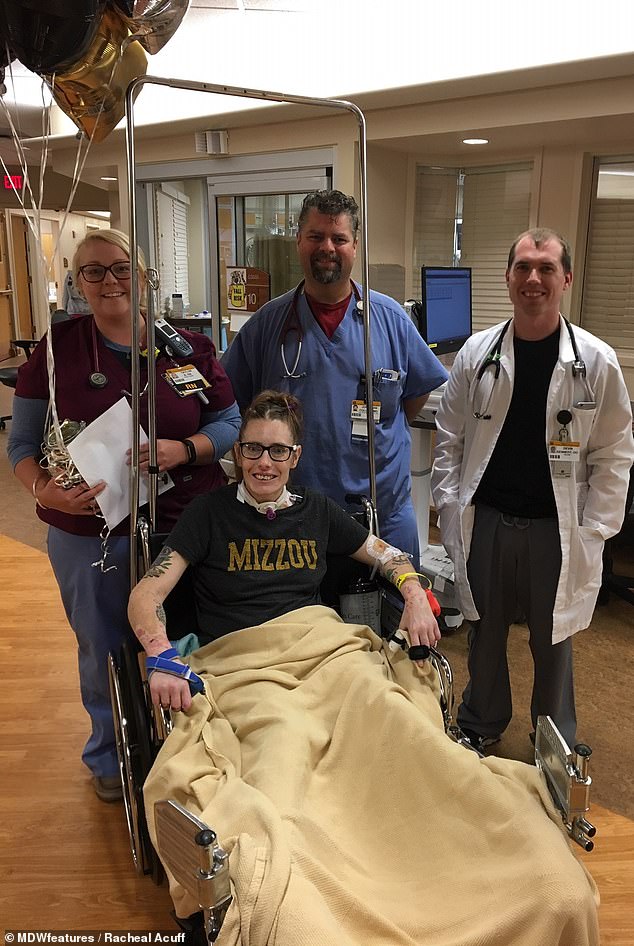 Ms Acuff, pictured with hospital staff who treated her, said she has ‘no medical reason to be alive’ and is trying to raise awareness of the symptoms of sepsis 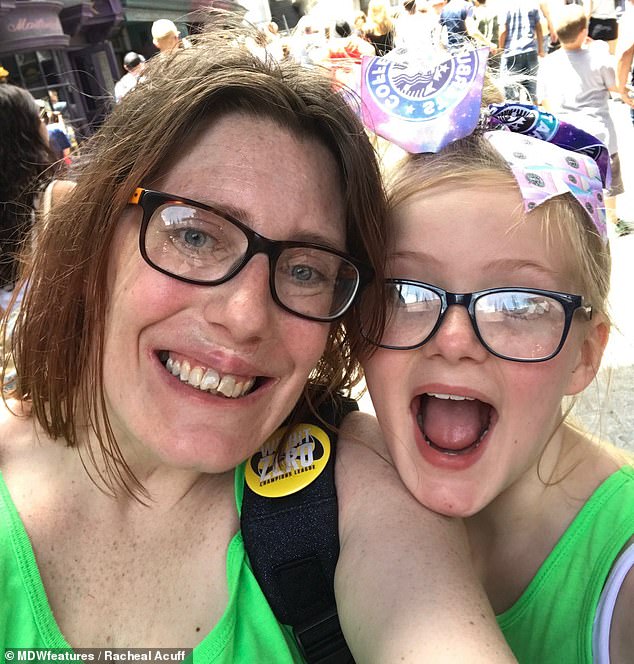 Ms Acuff, pictured with Reegan on an unknown date, is learning to adapt to life without her right hand and is looking forward to getting a prosthetic hand in a few weeks’ time 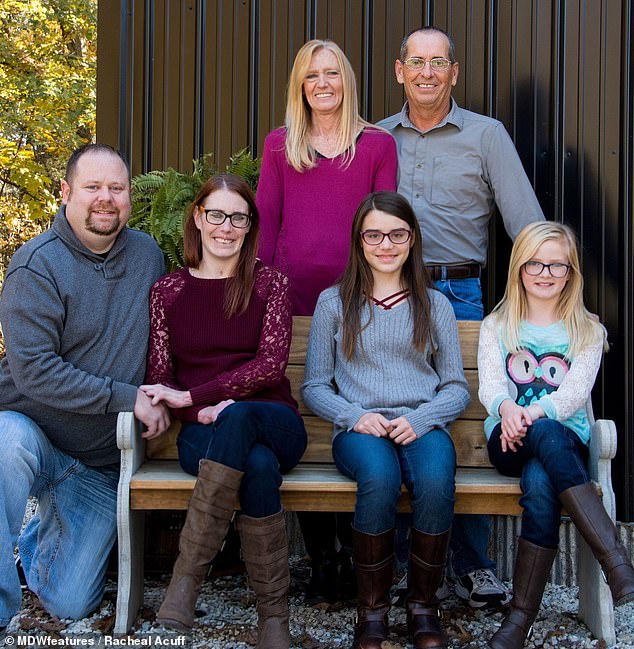 Although Ms Acuff’s recovery has been incredibly tough, it has taught her to appreciate everything in life. Pictured with her family, including her parents, at her home

‘The recovery of each surgery was different with my foot surgery being the worst, I couldn’t walk on them for three weeks and it was very painful.

‘My most recent hand amputation has been difficult in that I lost a whole hand, lucky for me I’m left-handed and they took my right but it’s still different.

‘I have grown so much through this process in myself and in my faith in God.

‘I soak up every moment good and bad and never take life for granted. It’s such a special gift you’ve been given so live it well, because you’ll never know when it could be taken away from you, and when it’s real bad remember, it’s just a bad day not a bad life.’

Since her near-fatal experience with sepsis, Ms Acuff has made it her mission to spread the word about sepsis.

She said: ‘The only symptom I had was excessive tiredness. I never ran a fever and had no other signs of infection. My advice to anyone who reads my story is be your own doctor first.

‘Take control of your illness, your doctor works for you, make them run that test or lab work. They are not perfect, and they don’t always catch things.’

Sepsis occurs when the body reacts to an infection by attacking its own organs and tissues.

Some 44,000 people die from sepsis every year in the UK. Worldwide, someone dies from the condition every 3.5 seconds.

Sepsis has similar symptoms to flu, gastroenteritis and a chest infection.

Symptoms in children are:

Under fives may be vomiting repeatedly, not feeding or not urinating for 12 hours.

Anyone can develop sepsis but it is most common in people who have recently had surgery, have a urinary catheter or have stayed in hospital for a long time.

Other at-risk people include those with weak immune systems, chemotherapy patients, pregnant women, the elderly and the very young.

Treatment varies depending on the site of the infection but involves antibiotics, IV fluids and oxygen, if necessary.