By Ian Randall For Mailonline

The first known extraterrestrial protein has been found inside a meteorite — named Acfer 086 — that fell to Earth in Algeria 30 years ago, a study has found.

The protein — hemolithin — contains iron and lithium, suggesting that the building blocks of life could already exist out in space.

Meteorites containing hemolithin could therefore play a role in seeding life on habitable planets like the Earth by delivering proteins to their surfaces.

Scroll down for video

The first known extraterrestrial protein has been found inside a meteorite — named Acfer 086 — that fell to Earth in Algeria 30 years ago, a study has found. Pictured, an artist’s impression of meteorites entering the Earth’s atmosphere

Acfer 086 is a meteorite that landed in one piece in Algeria.

Hemolithin is a relatively small protein, composed mainly of the amino acid glycine with caps of iron, lithium and oxygen at its ends.

While all of these elements are familiar to scientists, this is the first time that such a configuration has been seen on the Earth.

Although the molecule’s presence isn’t necessarily indicative of life, it could have played a role in starting creating such — with the iron oxide tips at the ends of the hemolithin molecules known to use light to split water into hydrogen and oxygen.

This, she added, means it could ‘represent a first energy source to chemistry, going on to biochemistry on the surface of planets like Earth in terms of their mass and distance from their sun.’

‘This could apply to planets throughout the Universe.’

Although hemolithin is structurally similar to the proteins with which we are familiar, the protein’s ratio of hydrogen to isotope deuterium did not match anything found on Earth.

However, the ratio did bear a similarity to the composition of comets from the Oort cloud, the sphere of icy planetesimals that surrounds the solar system.

According to the researchers,, this suggests that the hemolithin in Acfer 086 may have formed in the proto-solar disk, some 4.6 billion years ago. 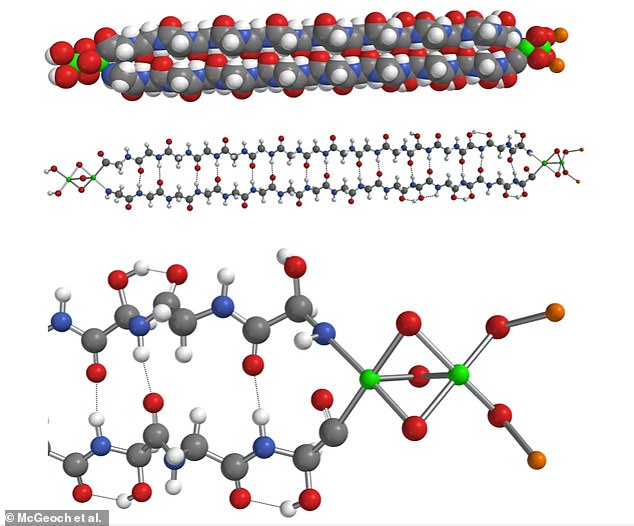 Hemolithin is a relatively small protein, composed mainly of the amino acid glycine with caps of iron, lithium and oxygen at its ends. Pictured, representations of of the hemolithin molecule, seen in space-filling mode (top) and ball and stick (middle and, in close-up, bottom.) White spheres are helium, grey is carbon, blue is nitrogen, red is oxygen, green is iron and orange is lithium. The close-up shows the iron oxide ends that could split water into its component parts

It is not entirely clear how a complex protein like hemolithin might have formed in the Acfer 086 meteorite, although finding simple amino acids and their precursors — like sugars and organic materials — in space is not unprecedented.

Individual molecules of glycine, however, have been predicted to form on the surface of dust grains — which could potentially have linked up to eventually form proteins if exposed to the right conditions in warm molecular clouds.

A pre-print of the researchers’ article, which has not yet been peer-reviewed, can be read on the arXiv repository. 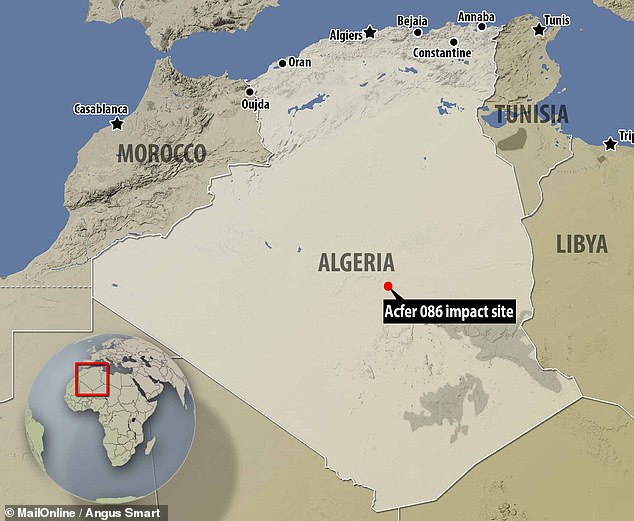 Acfer 086 is a meteorite that landed in one piece in Algeria. It was found in 1990 and weighed 6.1 ounces (173 grams). Researchers have discovered that Acfer 086 also contains the first known extraterrestrial protein, hemolithin

WHAT ARE THE DIFFERENT TYPES OF SPACE ROCKS?

An asteroid is a large chunk of rock left over from collisions or the early solar system. Most are located between Mars and Jupiter in the Main Belt.

A comet is a rock covered in ice, methane and other compounds. Their orbits take them much further out of the solar system.

A meteor is what astronomers call a flash of light in the atmosphere when debris burns up.

This debris itself is known as a meteoroid. Most are so small they are vapourised in the atmosphere.

If any of this meteoroid makes it to Earth, it is called a meteorite.

Meteors, meteoroids and meteorites normally originate from asteroids and comets.

For example, if Earth passes through the tail of a comet, much of the debris burns up in the atmosphere, forming a meteor shower.

Facebook Messenger is killing the ‘Discover’ tab to prioritise Stories

Koalas can run like rabbits at up to 6mph but prefer...

3D-printed anti-bacterial smartphone cases could help to stop the spread of...