Alfredo Morelos is all of the above. And his display at De Kuip last night merely reminded everyone of that.

In becoming the first Rangers player ever to score in four consecutive European games, in fact, Morelos moved the debate about his worth up a notch or two.

Two glorious headers to keep his team in the hunt for a place in the last 32 of the Europa League?

Setting a new record – for any player at any Scottish club – of European goals in a single season, eclipsing the efforts of one Henrik Larsson back in season 2002-03?

Maybe departing chairman Dave King had a point about knocking back £40 million for the talismanic destroyer of defences.

Perhaps manager Steven Gerrard wasn’t entirely joking when, on the eve of this match, he said you could ‘add ten onto that …’ and still not find Rangers willing to talk business.

The fact that Morelos’ 23rd and 24th goals of the season – numbers 12 and 13 of this European campaign and beating Henrik Larsson’s European record for a Scottish club in a single season – were needed to salvage point for Gerrard’s men merely underlines the Colombian’s importance to the Ibrox club. 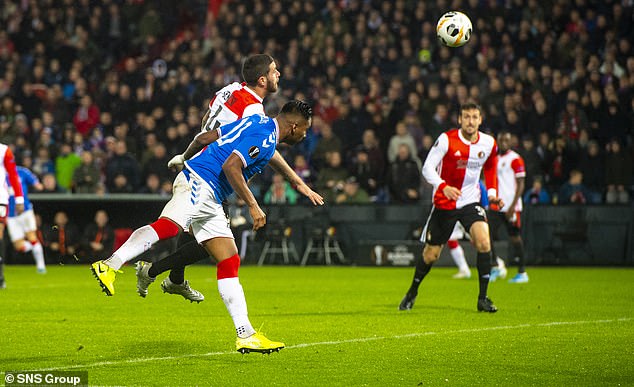 Rangers were trailing to a deflected Jens Toornstra strike when he equalised just seven minutes to the second half, sending the away fans penned into an upper tier at the Stadion Feyenoord into a frenzy of delight.

Those punters went absolutely wild when he scored with an even more impressive header after 64 minutes.

And, although Luis Sinisterra scored a brilliant individual goal just four minutes later, Rangers safely negotiated the closing stages to record another solid away result – in one of the most intimidating grounds in Europe.

The atmosphere in Rotterdam since Tuesday night, when the first groups of fans started dribbling into town, had certainly been on the feisty side of febrile. 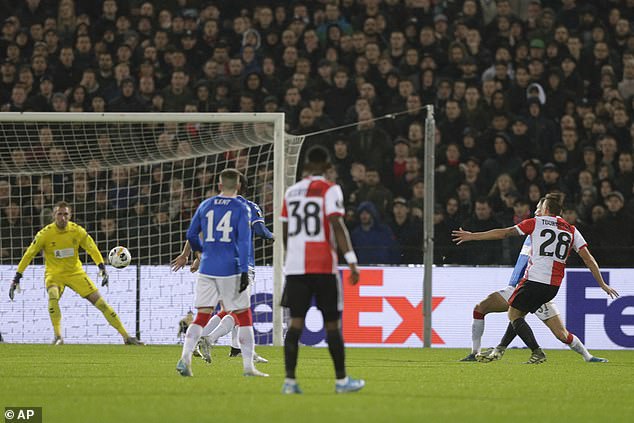 Trouble was definitely in the air. It wouldn’t take much to set off a damaging chain of events.

And the use of pyrotechnics by both home and away supporters, a case of overkill given the official fireworks display let off above roof level for the entertainment of all inside, is surely not going to be ignored by UEFA. Some folk genuinely never learn.

None of which should, by rights, have been of concern to Gerrard – a manager who was here to do an important job.

He stuck with a tried-and-tested European formula for this potentially decisive tie, making only one change from the starting XI who faced Porto at home last time out. 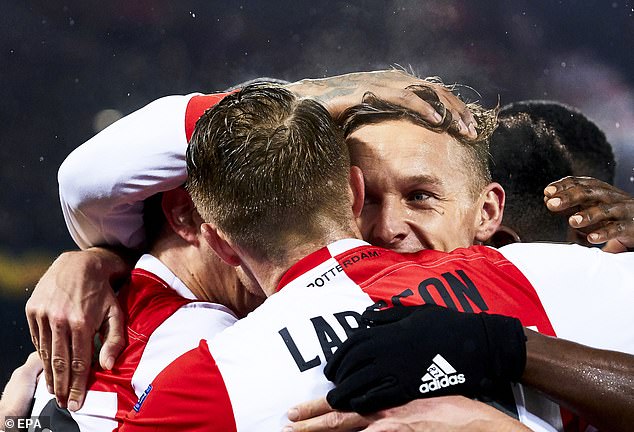 In came Sheyi Ojo for Brandon Barker, deployed on the right side of a three-man attack that included Ryan Kent on the left – and you know who at the spearhead.

How much is Morelos worth to Rangers? Funny money, according to both chairman and manager.

With third-choice goalkeeper Nick Marsman making his Feyenoord debut, taking the place of the injured Kenneth Vermeer, there was certainly value in someone having an early pop.

Morelos did just that with barely two minutes gone, shooting from a wide angle – but not, alas, testing the rookie between the sticks.

Feyenoord looked sprightly enough on the break, even if Sam Larsson’s early penalty appeal for a challenge by Ryan Jack was wildly optimistic. 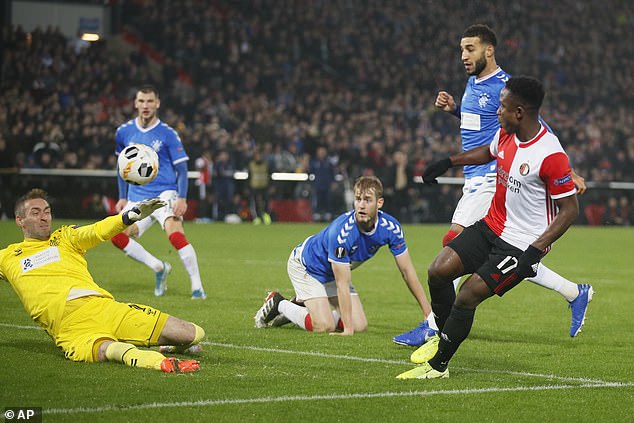 Orkun Kokcu passed up a great chance just moments later, heading wide and then belatedly claiming for a penalty as Borna Barisic put him under pressure.

At the back, though, the home side looked vulnerable. As witnessed when Eric Botteghin took calm and collected to new extremes by trying to put his foot on the ball … inside his own box with several Light Blue jerseys around him.

It might well have ended in an away goal, but for the ability of Marsman to clear up the danger.

Botteghin very nearly made amends in spectacular fashion with 18 minutes on the clock, connecting with a Steven Berghuis corner in thunderous fashion, his downward header somehow turned up and a way by Allan McGregor.

That came at the start of a purple patch for the hosts, who were now beginning to put the Rangers goal under sustained pressure. 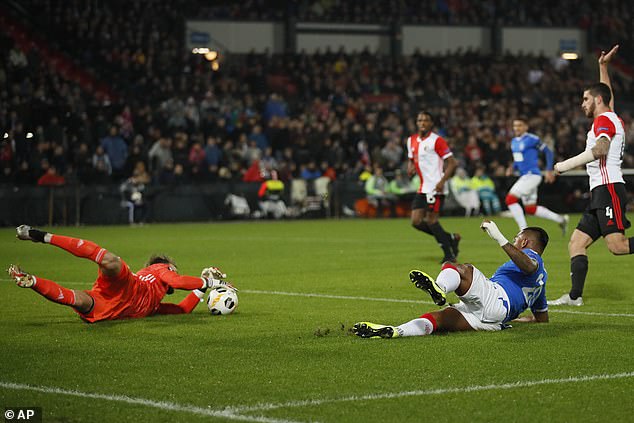 Luis Sinisterra should have hit the target from a fine Lutsharel Geertruida cross from the left just before the 25-minute mark; his right-footed one-timer blazed almost high enough to clear the protective netting surrounding the pitch.

The visitors, who certainly looked dangerous when delivering balls from either flank, needed to find a better finishing touch. Or a bit of luck.

They got that with the opener, Borna Barisic’s poor clearing header eventually finding its way to Toornstra – whose shot was heading well wide before it ricocheted off Filip Helander to leave McGregor helpless.

McGregor’s leg save from a one-on-one with home skipper Berghuis just moments after the goal halted the immediate threat of a rout. Ranger were relieved to hear the half-time whistle. 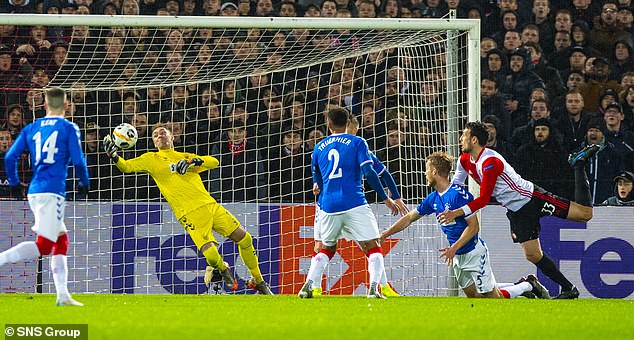 But he did tweak his tactics, sending Kent wider on to the left wing after 45 minutes of consistently drifting inside.

Cue an instant return on the switch, as the former Liverpool man danced down the touchline, cut back on to his right foot – and delivered a glorious cross that Morelos met at full speed, giving Marsman no chance.

The 23-year-old nearly put Rangers ahead a matter with the hour mark just past, his run down the inside right channel – a productive hunting ground – giving him the chance to test Marsman with a low skidding shot that the keeper just turned beyond his near post. 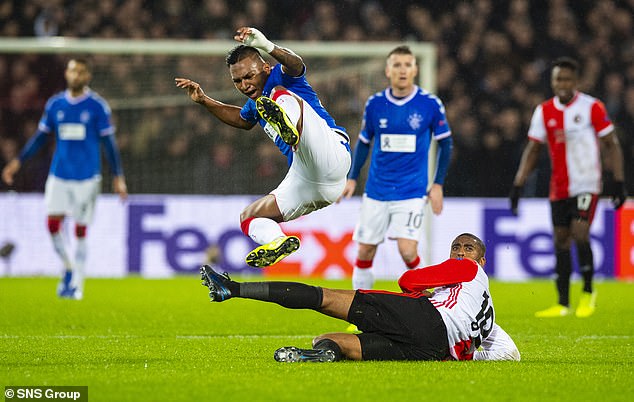 And he didn’t have to wait too long for his second, somehow finding a way – as he often does – to leap between and above two six-foot-plus central defenders to send a Barisic cross flying into the far corner.

Rangers were flying. They only had to hold on. Cue Sinisterra dancing his way into the box, sitting McGregor on his backside and cheekily dinking the ball beyond the keeper for an equaliser with 22 minutes remaining.

News of Porto’s fight back in Berne took a little edge off the celebrations in the away end; nothing their team did now would secure qualification for the knock-out stages.

With only Young Boys to come at Ibrox, though, they’ll fancy their chances of getting the required result. With Morelos in the starting line-up, anything is possible.