Back in September I wrote a column about the coming flu season. I warned about the very serious threat of a new virus emerging and causing a pandemic.

So will Covid-19, the coronavirus infection that has been devastating China, turn out to be a pandemic – a disease that sweeps the globe causing widespread death and destruction? It is too early to say, but it is certainly beginning to look that way.

Like many of the worst viral outbreaks of recent years, such as Sars, Mers and ebola, Covid-19 almost certainly originated in bats. The thing about bats is when they get infected, their bodies mount a particularly rapid and fierce immune response.

This protects them against infections, but it also means that the viruses that manage to get a foothold have ‘learnt’ how to reproduce quickly in a very hostile environment.

So when these viruses jump from bats to other animal species, including humans, they are battle-hardened and not only capable of reproducing swiftly but also highly transmissible.

Will Covid-19, the coronavirus infection that has been devastating China, turn out to be a pandemic – a disease that sweeps the globe causing widespread death and destruction? It is too early to say, but it is certainly beginning to look that way. (Above, a residential area in Beijing is disinfected on Saturday)

Although many coronaviruses start in bats, they typically come to us via other creatures.

Sars, for example, which killed ten per cent of those infected, reached humans via the Asian palm civet (a cat-sized mammal). Mers, which killed one in three, came via camels.

We don’t know for certain which animal, if any, acted as an intermediary for Covid-19, but the best candidate is a creature called the pangolin – a scaly, ant-eating animal which, despite being endangered, is still heavily used in Chinese traditional medicine.

Could malaria drugs help battle against this bug?

Covid-19 has killed more than 1,500 people and has the potential, in theory, to kill at least 50 million more. That’s roughly how many died from Spanish flu a century ago.

But what makes it different from normal influenza is that it is brand new, so few people will be resistant.

And here’s how to wash your hands… properly

You have to use soap and water, and you should wash your hands for about 20 seconds, making sure to rub the tips and get into the gaps between the fingers.

Much less than 20 seconds will be ineffective, much more will risk damaging your skin.

One way to estimate 20 seconds is to sing the whole of the Happy Birthday To You song, twice. 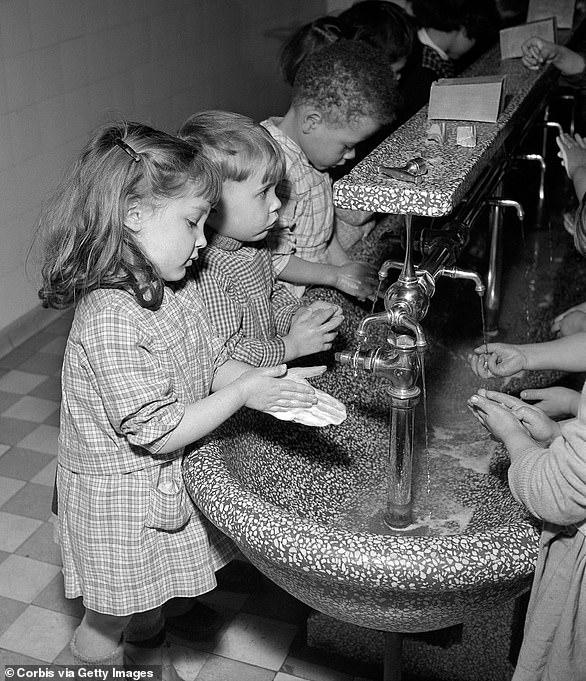 You have to use soap and water, and you should wash your hands for about 20 seconds, making sure to rub the tips and get into the gaps between the fingers. One way to estimate 20 seconds is to sing the whole of the Happy Birthday To You song, twice

It is especially important that you wash your hands when you come in from mixing with others and when you are about to eat.

If you can’t wash your hands, then alcohol wipes and those hand gels you get from pharmacies are better than nothing, but they are certainly not as good.

We can only hope that, like Sars, Covid-19 fizzles out before becoming a full-blown pandemic. I’m not optimistic.

That said, most people who get infected experience something mild, more like a cold. It is only when it turns into pneumonia that you are at serious risk of dying.

The current best guess is that it will kill about one per cent of the people who get it, making it considerably less lethal than Sars.

Our best long-term hope is a vaccine, which most experts agree is at least 18 months away from being available. But a couple of existing drugs could help.

There is, for example, an antiviral called remdesivir, originally developed to combat ebola.

Last week the New England Journal Of Medicine reported the case of an American who had recently come back from China and who was diagnosed with Covid-19. Showing signs of developing pneumonia, he was put on remdesivir and within 24 hours he had started to get better.

Tests done in the lab have shown that both remdesivir and chloroquine, a common anti-malarial drug, are very effective against this particular coronavirus.

But more tests need to be done before either is widely used.

The rate at which a virus spreads leads to it being given a basic reproduction number, usually abbreviated to R0. This virus appears to have an R0 of 2.6, which means that, on average, each person who gets it gives it to 2.6 others.

But there are some people who become infected only mildly, and then pass it on to lots of others.

They are known as super-spreaders, and Steve Walsh, a British businessman who last week was revealed to have infected at least 11 people, is a good example.

As well as super-spreaders, who are infected but don’t know it, others rapidly develop major symptoms which cause them to sneeze and cough vigorously.

By the time they do something about their ‘cold’, they have spread their viruses everywhere.

Many seem to be convinced that wearing a fabric face mask – like those worn by surgeons in operating theatres – is the answer to reducing this spread. But I wouldn’t bother. 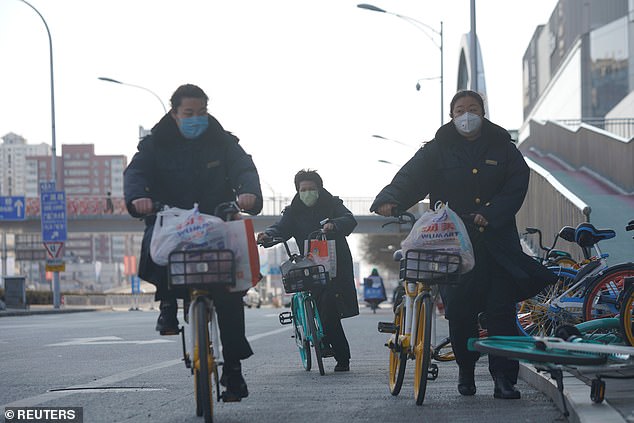 Many seem to be convinced that wearing a fabric face mask – like those worn by surgeons in operating theatres – is the answer to reducing this spread. But I wouldn’t bother

If you are infected there’s a small chance that wearing a mask will stop you spreading to others – and perhaps protect you if someone coughs directly in your face.

But as soon as that happens, you have to get rid of the mask right away. A dirty, damp mask is worse than useless.

The best defence is far simpler, and cheaper: proper hand-washing. Most of us already know this, but few people bother doing it properly, probably because we can’t actually see germs on our hands.

One of my medical heroes is Ignaz Philipp Semmelweis, a Hungarian doctor, who showed more than 170 years ago how important hand-washing can be.

In the 1840s he was working in a hospital in Vienna and noticed a greater number of pregnant women were dying of puerperal fever – also known as childbed fever – in the wards where they were being looked after by medical staff, rather than by midwives.

DO YOU HAVE A QUESTION FOR DR MOSLEY?

Email drmosley@mailonsunday.co.uk or write to him at The Mail on Sunday, 2 Derry Street, London W8 5TT.

Dr Mosley can only answer in a general context and cannot give personal replies.

He decided this was because the medics would come straight from the morgue, where they had been examining corpses, to the bedside, where they would do intimate, internal examinations on their female patients.

Although this was well before we knew about the existence of microscopic germs, Semmelweis was convinced the doctors must be carrying something on their hands.

He insisted they wash their hands in a chlorinated lime solution, and death rates from puerperal fever soon fell dramatically.

But his fellow doctors regarded hand-washing as faddish and resented the implication that they were killing their patients.

So they ganged up and had him removed. 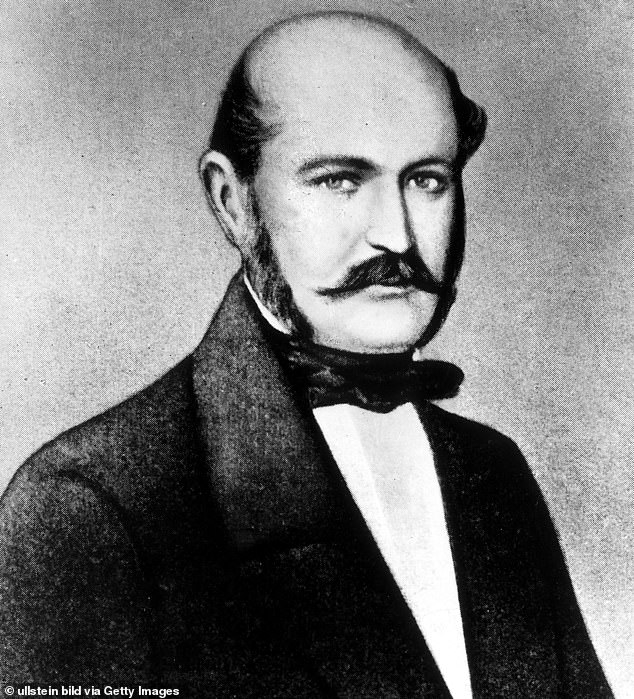 One of my medical heroes is Ignaz Philipp Semmelweis (pictured), a Hungarian doctor, who showed more than 170 years ago how important hand-washing can be

Poor Semmelweis had a mental breakdown and was taken to an asylum, where he died from an infection at the age of 47, after being beaten up by his guards.

Years later his claims about the importance of hand-washing were widely accepted.

Depressingly, even now studies have shown that only about 70 per cent of people wash their hands after going to the toilet.

And of those who do, only 50 per cent use soap and water for the recommended 20 seconds.

Researchers calculated that if we could simply boost hand-washing at airports to triple the current rates (studies show just one traveller in five has clean hands), this would slow the spread of diseases such as coronavirus by up to 70 per cent.

The moral of the story is that the best way to protect yourself and the rest of your family is to wash your hands, particularly if you have been in a crowded space like an airport or railway station, where you might have picked something up.

Italian woman, 25, grows eyelash-like hairs out of her GUMS thought...

Catch-22 for cancer patients on opioids