The virus-carrier was reportedly one of 250 delegates at the UK Bus Summit at the QEII Centre on February 6, whose star speaker was Boris Johnson‘s Buses Minister, Baroness Vere of Norbiton.

MailOnline understands the coronavirus patient who attended the conference was not the ninth case – a Chinese woman who took an Uber to A&E at Lewisham Hospital in south London on Sunday night.

The patient’s presence in central London at a packed conference will spark fears among the hundreds of people there from the transport industry amid growing public anxiety about the spread of the SARS-CoV-2 virus.

The summit’s speakers included Baroness Vere, who posed with an all-electric bus outside the QEII Centre, which is around 100 yards from Westminster Underground Station.

Last night it emerged that more than 750 British patients were tested for coronavirus in one day as panic over the outbreak intensified across the country. Almost 65,000 patients around the world have now caught the virus and nearly 1,400 have died.

The virus-carrier was reportedly one of 250 delegates at the UK Bus Summit at the QEII Centre on February 6 (Boris Johnson ‘s Buses Minister, Baroness Vere of Norbiton speaks at the summit) 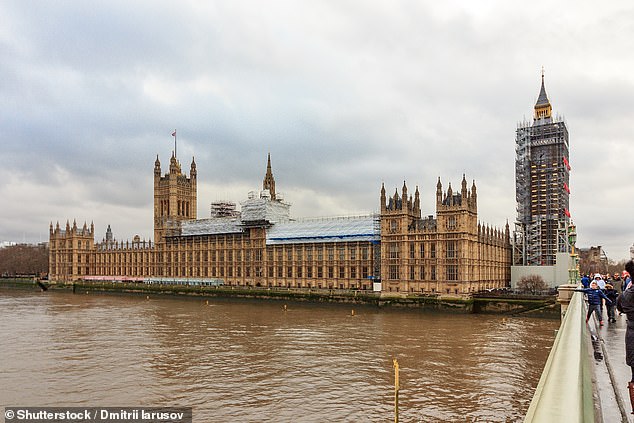 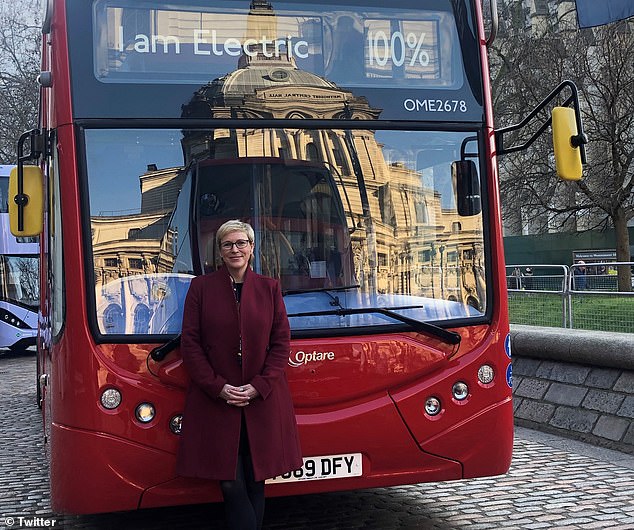 The summit’s speakers included Baroness Vere, who posed with an all-electric bus outside the QEII Centre, which is around 100 yards from Westminster Underground Station 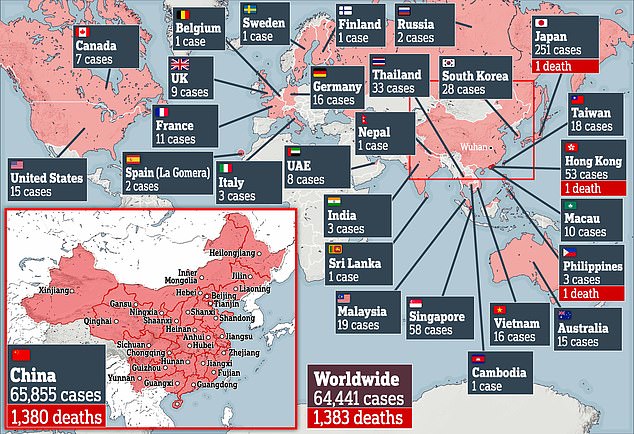 London has been on red alert for more coronavirus cases after the capital’s first confirmed patient took herself to A&E in an Uber on Sunday and walked into a public area of Lewisham Hospital – going against strict advice to stay at home and ring NHS 111.

Two healthcare workers who came into contact with the Chinese woman at the hospital have been told to self-isolate and the taxi driver’s account has been temporarily suspended.

The woman, who contracted coronavirus in China, ‘self-presented’ at Lewisham Hospital before being sent home to await the results of tests.

She was rushed to St Thomas’s yesterday after her test results returned positive. She is believed to live with family in London and to be in her late 20s or early 30s.

All attendees at the UK Bus Summit have been emailed warning them that someone at the summit had the killer disease, according to the Financial Times.

Attached was a letter from Public Health England (PHE) telling anyone who develops flu-like symptoms to self-isolate at home and call the NHS’ 101 helpline.

The email said: ‘While the degree of contact you may have had with the case at the summit is unlikely to have been significant, we are taking a precautionary approach and informing you.’

Official advice from PHE states that anyone who suspects they have coronavirus should stay at home, call NHS 111 and await transport to the nearest hospital assessment pod.

The Chinese patient was the first case in London and doctors are worried that the disease’s emergence in the capital will lead to it spreading quickly. 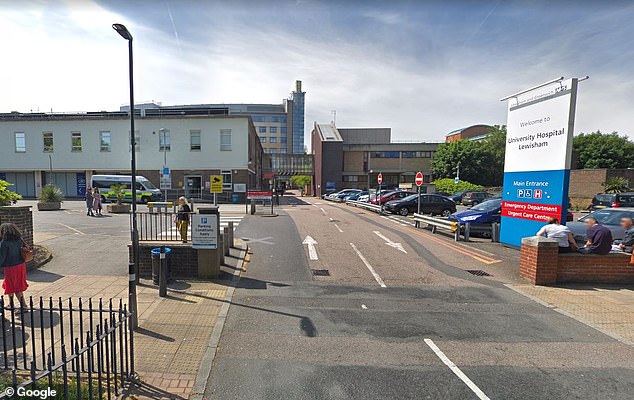 The latest coronavirus patient went to A&E in Lewisham in an Uber. When it was revealed she might be infected with the illness, an ambulance was called to take her home after tests 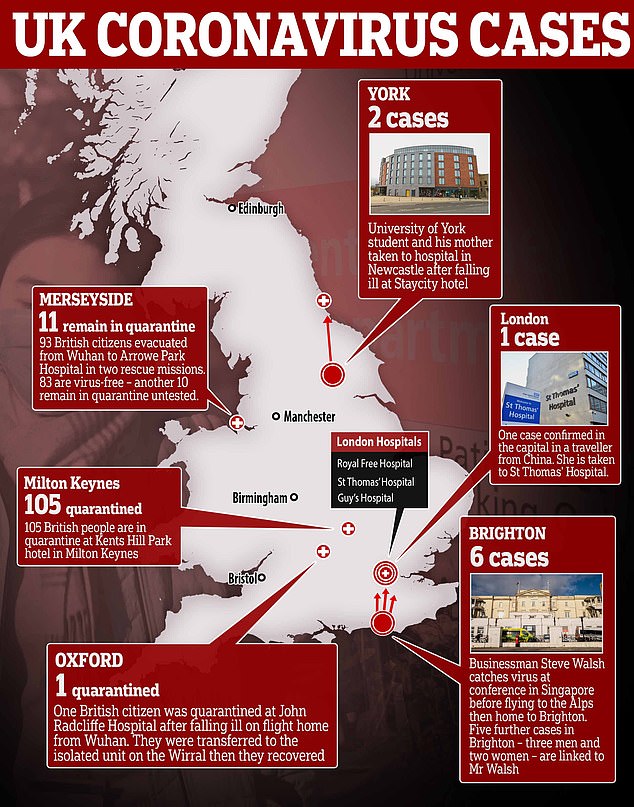 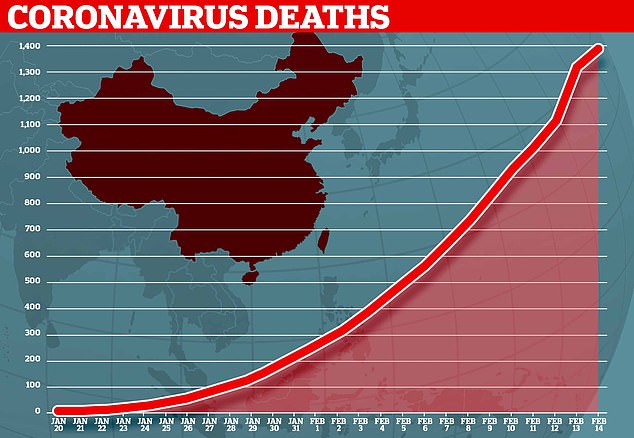 Nearly 1,400 patients have been killed by coronavirus since the outbreak began in Wuhan 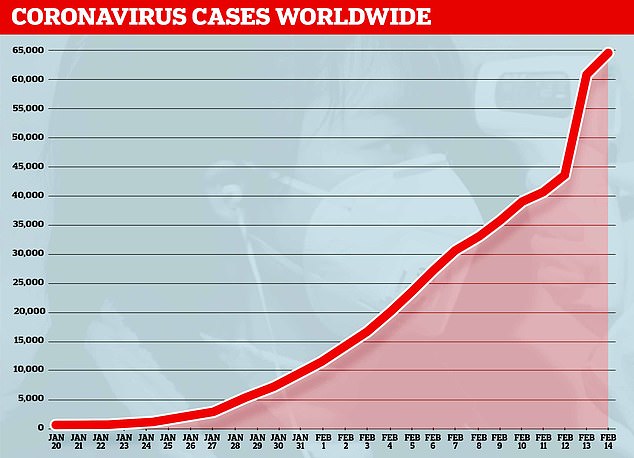 Almost 65,000 patients around the world have now caught the virus after China reported 5,000 new cases yesterday

Dr Robin Thompson, an expert in mathematical epidemiology at Oxford University, said: ‘In general, if an initial case is in a densely populated area, then the risk of sustained person-to-person transmission following is higher. This is exacerbated by the fact that London is a transport hub, and the Underground could provide a network to spread the virus quickly.’

Yesterday morning paramedics in hazmat suits turned up to a flat in Paddington, central London, after a patient reported symptoms. Video footage shows a man in a black hoodie walking into an ambulance at 9.45am with two staff members in full body gowns.

What do we know about about the Chinese coronavirus patient?

February 9: Orders an Uber and is taken to Lewisham Hospital after coming down with flu-like symptoms.

Later that day she is transferred to St Thomas’ Hospital in central London, where she is in isolation.

Two healthcare workers who came into contact with the Chinese woman at Lewisham Hospital have been told to self-isolate – and the Uber driver’s account has been temporarily suspended.

The Ritchie Street Health Centre in Islington, north London, posted a message on its website stating it would be closed until today ‘due to the coronavirus’. The Ferns Medical Practice in Farnham, Surrey, said that it was undertaking a deep clean after a patient had come in after visiting ‘one of the affected coronavirus areas’.

Some 2,512 people in Britain have been tested since last month. Patients with suspected coronavirus have swabs taken of their nose and throat which are sent to one of 12 labs across the UK.

Results usually come back within 48 hours – although they can be turned around in 24 hours – and the NHS can test a maximum of 1,000 patients in a day.

Chief Medical Officer Professor Chris Whitty said officials were hoping to delay the spread of the coronavirus in this country until the summer.

He told BBC Radio 4’s Today programme: ‘Delay is the next stage of what we need to do because if we are going to get an outbreak in the UK – this is an if, not a when – but if we do, putting it back in time into the summer period, away from winter pressures on the NHS, buying us a bit more time to understand the virus better… is a big advantage.’

He added that while it was ‘highly likely’ the UK would see more cases, the disease could be ‘dampened’ as the weather got warmer.

The head of the NHS, Simon Stevens, said that to contain the spread many more patients would need to self-isolate at home if they had suspicious symptoms.

Praising the coronavirus evacuees who left the Wirral yesterday after 14 days of isolation, he said the Arrowe Park Hospital ‘guests’ had ‘set an important example, recognising that over the coming weeks many more of us may need to self-isolate at home for a period to reduce this virus’s spread’.

DR MICHAEL MOSLEY: Can electric shocks to your brain give you...