Officials from Colorado Parks and Wildlife have confirmed the presence of wolves in the state after analyzing scat samples found near an elk carcass in January.

The samples were collected from an area called Irish Canyon in the northwestern corner of the state, near the borders of Wyoming and Utah.

Park officials discovered the elk carcass on January 19 and observed several wolf-like tracks around it.

Scroll down for video

Colorado officials confirmed scat samples collected in January came from wolves, claiming the state had its first permanent wolf residents since the 1940s

While investigating the surrounding area, they heard howls and, using binoculars, were able to spot a pack of what they believed to be six gray wolves.

The officers observed the wolves for around 20 minutes before losing site of them again.

Lab analysis of four scat samples gathered from around the elk carcass after the siting confirmed the animals were indeed wolves, according to a report from Fox 31 in Denver.

‘While lone wolves have visited our state periodically including last fall, this is very likely the first pack to call our state home since the 1930s,’ Colorado governor Jared Polis said in January, after the initial discovery.

Wolves were originally killed off in Colorado in the 1940s by hunters, but small wolf populations still live in both Utah and Wyoming. 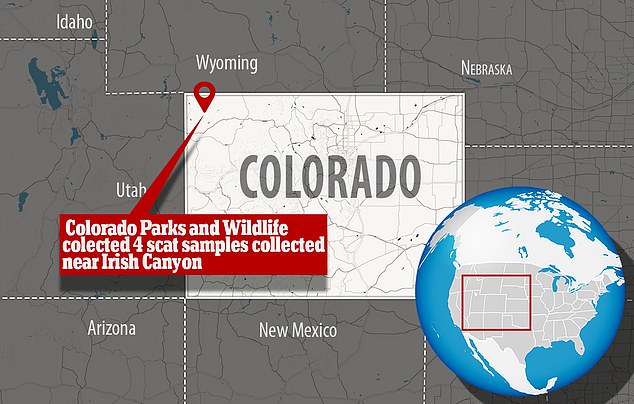 After discovering the elk carcass in January, park officials heard howling and were able to spot the wolf pack with binoculars. They maintained visual contact for around 20 minutes before losing sight of them again

Though there’s been no evidence of a wolf pack making permanent residence in the state, there have been many sightings over the years.

In 2007, a Colorado Parks and Wildlife manager recorded a gray wolf in the mountains outside of Walden in the northern part of the state.

In July 2019, another wolf was spotted in the wilderness west of Boulder.

In October 2019, a hunter captured footage of six wolves in the northwestern part of the state. 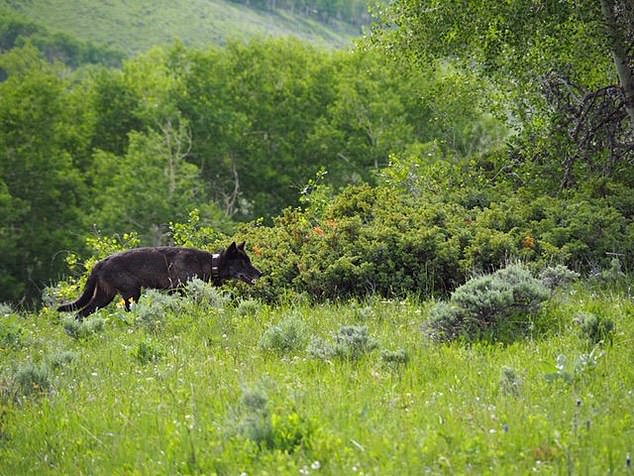 Wolf sightings have occurred in Colorado throughout the years, including in 2019, when a state official observed what they believed to be a lone gray wolf 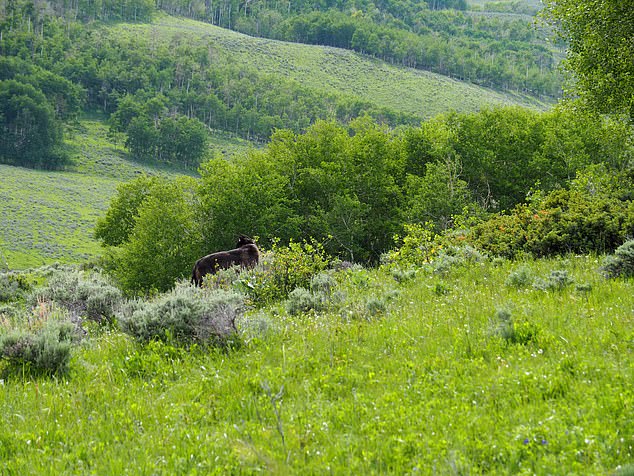 The previous sightings were believed to have been wolves that lived in neighboring states, including Utah and Wyoming, and wandered into Colorado without staying

Many Colorado residents have welcomed the idea of wolves returning to the state.

This November, state residents will vote on a ballot initiative to fund an eight-year, $5.7million program to reintroduce wolves to the state.

A recent poll showed that 84 percent of Colorado residents support the initiative.

Local ranchers and hunters have formed a group called the Stop the Wolf Coalition to fight against the ballot initiative, citing fears that a renewed wolf population would endanger the state’s livestock.

The ballot initiative includes funding to pay for any potential livestock losses, but for some ranchers feel as if it’s their way of life that’s at stake, not just their money.

‘I’ve got 60 years of breeding into this herd, so it’s more than the market value of that animal,’ Jay Fetcher, who raises cattle near Steamboat Springs, told NPR.

Polis has warned locals against taking matters into their own hands should wolves eventually see their numbers grow further.

‘It’s important that Coloradans understand that the gray wolf is under the protection of the Endangered Species Act,’ he said.

‘While the animals have naturally migrated to our state and their presence draws public interest, it’s important that people give them space.’

‘Due to their Protected status, there are severe federal penalties for anyone that intentionally harms or kills wolves in our state.’

HOW ARE WOLVES AND DOGS RELATED?

A genetic analysis of the world’s oldest known dog remains revealed that dogs were domesticated in a single event by humans living in Eurasia, around 20,000 to 40,000 years ago.

Dr Krishna Veeramah, an assistant professor in evolution at Stony Brook University, told MailOnline: ‘The process of dog domestication would have been a very complex process, involving a number of generations where signature dog traits evolved gradually.

‘The current hypothesis is that the domestication of dogs likely arose passively, with a population of wolves somewhere in the world living on the outskirts of hunter-gatherer camps feeding off refuse created by the humans.

‘Those wolves that were tamer and less aggressive would have been more successful at this, and while the humans did not initially gain any kind of benefit from this process, over time they would have developed some kind of symbiotic [mutually beneficial] relationship with these animals, eventually evolving into the dogs we see today.’

Shells of Dungeness crabs in the Pacific Ocean are DISSOLVING due...

First image ever taken of a black hole is crowned as...