By Harry Wise For This Is Money

Warner Music Group, whose roster of artists include Ed Sheeran and Liam Gallagher, has said it is planning to become a publicly traded company.

The entertainment giant, which is the world’s third largest music company, has not provided details regarding the date of a potential listing or how much of the company might be sold.

Warner Music is owned by Soviet-born UK-based billionaire Sir Len Blavatnik, whose conglomerate Access Industries bought the firm off the stock market in 2011 for £2.5billion.

Some of the world’s most prominent record labels belong to Warner Music, including Elektra, Parlophone and Atlantic which produced the first five Led Zeppelin albums.

The firm recently posted its highest quarterly revenue for sixteen years, earning $1.26billion (£970million)  in the last three months of 2019, while net income rose a strong 42 per cent to $122million (£94million).

Along with Universal Music Group and Sony Music Entertainment, Warner is considered one of the ‘Big Three’ global music conglomerates, which control a vast share of the record industry.

Record labels have been financially damaged by the rapid decline of traditional album sales in the last two decades, but have started to come back in recent years as a result of the popularity of streaming services like Apple.

Digital revenue grew by over 13 per cent in the last quarter, which Warner says is down to the continued growth in streaming. Physical and licensing revenue by contrast endured declines, though recorded music revenue went up in every region.

Music publishing revenue also recorded a revenue rise of 4.8 per cent. The group owns Warner Chappell, one of the world’s biggest music publishers that administers the copyright for rock bands such as Muse, Radiohead and Led Zeppelin. 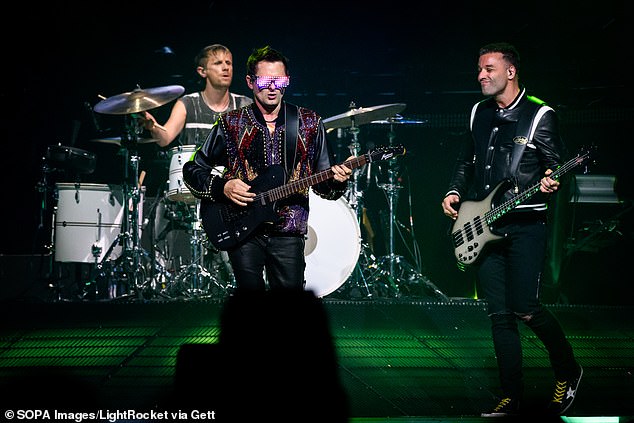 Warner’s owner Blavatnik is one of the richest men in the world, with an estimated fortune of $19billion. Born in the city of Odessa, Ukraine, he made his initial wealth in petrochemicals and aluminium.

After setting up TNK-BP in 2003 with the British oil firm and two other Russian businesses, he helped turn it into one of the ten largest private oil companies in the world, before selling his share of the business in 2013 for $7billion.

He has since diversified into the media, telecoms, real estate and technology sectors.

Access Industries has made investments in numerous music companies including streaming services Spotify and Deezer.

Blavatnik has also donated hundreds of millions of pounds to universities, including a £75million gift to Oxford University to create the Blavatnik School of Government.

This was topped in 2018 by a £200million donation to Harvard Medical School, the school’s largest ever donation, for research, laboratory space for biotech startups, and investments in data science.